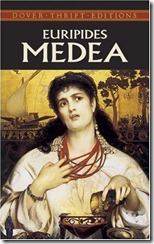 Synopsis: (sorry this synopsis contains spoilers) Medea is abandoned by her husband Jason when he is offered marriage with a princess. Medea seeks her revenge on Jason by murdering both the princess and her father, the king, and finally her two children with Jason.

My Thoughts: “Hell hath no fury like a woman scorned” ~ William Congreve (paraphrased)

Whenever I read the Greek tragedies I can’t help but think of the daytime soap operas of our time. Although I can understand Medea’s feelings, she goes so totally overboard. Yes Jason’s behaviour is deplorable but to go on a killing spree is a bit much. At the same time, especially in the light of some of my other resent readings, I can’t help but see the vulnerable position Medea is put in. Although she is, by ancient Greek standards a great catch, being related to the Gods, she is pushed aside when Jason gets a “better offer” from the king. Medea herself points out this vulnerable position at several points in the play:

We women are the most unfortunate creatures.

Firstly, with an excess of wealth it is required

For us to buy a husband and take for our bodies

A master; for not to take one is even worse.

And now the question is serious whether we take

A good or bad one; for there is no easy escape

For a woman, nor can she say no to her marriage.

Not only is she put in a vulnerable position when she doesn’t have a husband any longer, the king is forcing her into an uncertain exile. To a certain extent Medea has made this bed for herself by her actions with regards to her own family. She committed crimes in order to help Jason (she killed her brother) that means she is already in exile, however, she committed these crimes to help her husband, who has now summarily cast her aside. Who wouldn’t have a little nutty? Despite this I still think her actions are totally overboard.

As I said initially, Greek tragedies never fail to remind me of soap operas. They are so melodramatic. But at the same time I think this is what makes them so enduring. The themes of abandonment and the following anger and wish for revenge are ones that we can relate to still. To some extent Medea’s story, when one disregards certain magical elements, could still take place today. And unfortunately it occasionally does. Part of me is saddened by this. Have we really not gotten any further along in our emotional lives? But at the same time I take a certain comfort in the fact that we haven’t devolved either. Is that bad?

I thought Warner’s translation was really good. It was easy to follow the language and the story while still keeping some of the flow that Greek dramas should have. The publishers had also not gone overboard with the footnotes but rather kept these short but informative. What I would have liked was a short explanation of the preceding stories of Jason and Medea as it has been a very

long time since I read/saw them. Yes I can go out and find them for myself, but it would have been handy to have them included in this edition. Overall I recommend this play and this edition to anyone who finds the Ancient Greeks intimidating as it is very short and very readable.

I think your comparison to soap operas actually made me more confident that I could read a classic play. Not that I watch soap operas or enjoy them, but it somehow makes the plays seem less frightening?

I'm thinking of buying a bunch of Euripides's plays -- he was an awfully good writer, Euripides. Have you read Trojan Women? It's really good.

I only once saw it performed as a play, but even then I thought it was indeed very soap-opera like ;) One of my friends actually named their first-born Medea... hope she won't have sons!

I really enjoyed reading MEDEA last year. I too was amazed by how readable it was. This is a great write up about it.

thank-you for being the first book blog i followed! i have received the stylish blogger award and am passing it on to you! thanks!

Congrats! You have received the Stylish Blog Award! Check it out on my blog: