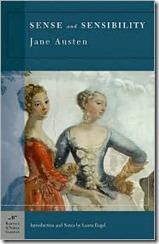 Sense and Sensibility by Jane Austen

Synopsis: The two Dashwood sisters, Elinor and Marianne couldn’t be more different if they tried. Elinor is clam and considerate whereas Marianne is romantic and passionate. The two sisters have very different ideas of what constitutes a perfect husband, and both face heartache because they set their sights on men who do not quite live up to the sisters ideas of who these men are.

My Thoughts: Well I don’t think I will ever be an Austen fan and this book did nothing to change that (but for the Austen versus Dickens fight it should be noted that I am also not a Dickens fan, so call me a tie). I like this book better than I liked Emma last year but it is still not one of my favourites. I did see the humour and sarcasm that everyone seems to go on about in Austen’s books. Quotes such as the one below had me giggling:

At last the affair was decided. The ivory, the gold, and the pearls, all received their appointment, and the gentleman having named the last day on which his existence could be continued without the possession of the toothpick-case, drew on his gloves with leisurely care and bestowing another glance on the Miss Dashwoods, but such a one as seemed rather to demand than express admiration, walked off with a happy air of real conceit and affected indifference.

The comment about not being able to live another day without a toothpick-case strikes me as a rather caustic comment on the materialism of certain parts of society at the time. I found it highly amusing that we could write something similar about certain aspect of our own society. This is perhaps where we can find the reason why these books keep enduring. There is some insight into the character of mankind.

Despite this I do not love the book as others seem to love Austen. I think it is perhaps the fact that the books all seem to similar for me. There are the interfering older women; the miss understandings between the young couples; the need for money, although no one ever seems to actually work. It is all always so similar. I also found the ending to be a bit to pat for me, and I do like a happy ending.

I have now read all but one of Austen’s novels left to read: Persuasion and from what I have heard this is many people’s favourite so I will probably give it a go, but Austen will never fall on my frequent re-reads. 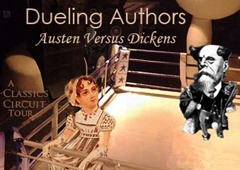 I call myself a "fan" of Austen, and yet Sense and Sensibility is one of those books by her that I never really liked. I tell myself I should give it another try, since it is a favourite of so many, but I cannot get myself to.

I hope you like Persuasion better, when you get to it. It is definitely my favourite Austen.

Persuasion is just wonderful, tied with Pride and Prejudice for my favorite Austen.

It's true that Austen has the repeating themes but that's pretty much what she knew -- there were so few choices for people of her class, for women as well as men. I think I would have died of boredom if I was an upper-class woman of that time.

I've never read any of Austin's books. Not real sure why but have them on my TBR list for this summer.

Persuasion is definitely my favorite Austen, but that said, I haven't actually reread any of her books for years, so I have no idea what I'd think of them now... I think I'd still enjoy them, but I can also see why she's not your style.

I love some of Austen's novels and feel very indifferent about the others, Sense And Sensibility being one of those others. I did love the episode with the toothpick, and there were a few other humorous points but all in all I felt in dragged unnecessarily.

I'm not a fan of Persuasion, but yes, it is very popular.