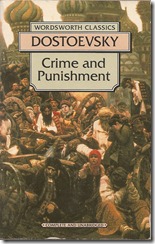 Crime and Punishment by Fyodor Dostoevsky

Synopsis: Dostoevsky’s novel looks at what happens when a poor former student kills a pawnbroker in order to test his hypothesis regarding the supreme right of some people to kill to change society.

My Thoughts: It is hard for me to comment on this book. I really wanted to like it. I really did. Only I found it very hard to follow at times, mainly because of the many names each character has. I know that this is common in Russia, where people use first and middle name and often have pet-names, but for me this made it very hard to follow who was who.

I think part of my problem was with the translation. It felt incredibly clunky at times. It was choppy and just plain weird at times. I was rather worried when I realised my edition didn’t have a named translator. That is never a good sign I have found.

Underneath these issues it was a good story. The exploration of a deranged mind can be quite interesting. In part it reminded me of “That Scottish Play”, with the guilty conscience causing an individual to go completely insane. It was also an interesting look at morality. Can someone actually have a right to kill someone? The answer in this book is unequivocally no. But at the same time it does seem to say that there are other crimes that are worse. Luzhin is shown to be the scoundrel that Raskolnikov believes him to be and Svidrigailov too gets the punishment he deserves, whereas there are mitigating circumstances for Raskolnikov.

Although I didn’t completely love this book, I am willing to give another translation a try. I think I would like it. 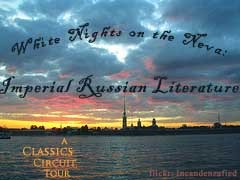 Purchase Crime and Punishment from BookDepository

This was one of my all-time favorite books from high school reading. I totally get your issues with it though. The names issue is hard and I did get annoyed wading through the middle part. But for me, the ending made it totally worth it. I think that might just be the romantic in me though.

And I think I understand it: a curiosity, about something unequivocally reprehensible, just to see if you could get away with it. I think that's what underlies his theory anyway.

That is why I wanted to like it. The philosophical underpinnings are interesting and worthy of study. I just (like you) found the middle parts to be...well I don't know, difficult?

I had the same sort of experience with my book for the tour (Dead Souls, by Gogol). I feel your pain! But, like you, I got the sense that it was a book worth trying again.

I didn't care for Crime and Punishment myself, which was unfortunate because my mother had sworn up and down that even if I didn't like Russian writers generally, nobody could fail to love Dostoevsky. :/ Next time I read a Russian novel, I'm going to keep notes of all the characters and all their different names.

well, my copy had a character listing in the front that I referred to often when I was unsure.

I think it's a lot deeper than maybe you suggest. Dostoeyvsky doesn't really say "NO" ever. Everyone is far more complicated than we imagine at first... But then I LOVE this book. I'm so sorry to hear that it was clunky in the translation you read!

I don't believe I've read Dostoeyvsky yet, but it certainly does seem that translation quality is key. I remember when I read "Anna Karenina" by Tolstoy, that there were a lot of name variations and pet names, too!

This is one of the only "Russian Lit" classics I have not read. I am currently reading "The Idiot" for the Classics Circuit. I understand your translation issues...I think luckily I have got a good one. Give another a try...I have become really entranced by "The Idiot". Thanks for the review!

Oh, I'm a little sad to hear this because Crime & Punishment was one of my favorite books to read and analyze in high school. I loved the characters, the moral dilemma and the redemption. That said, I think translation can make or break a book like this! I have heard a lot of Dostoevsky's books are good, but haven't tried any others yet. I hope to!