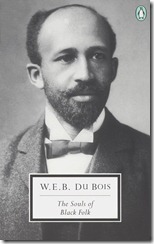 The Souls of Black Folk by W.E.B. Du Bois

My Thoughts: Let me start this review by saying that I am white. I am blond, blue eyed Swedish Irish American. All that is needed for me to turn a lovely lobster red is for me to THINK about the sun. The reality that faced W.E.B DuBois is probably as far from any reality I will ever come, yet this book spoke to me. It spoke loudly. I found myself agreeing with what was written. I made notes in the margin. I made exclamation marks. I could fully understand the reality he was describing. To me that is the mark of a great book.

The first two sections of the book deals with the history of the black people. It tells of the mistakes and mismanagement that followed the emancipation proclamation and the problems that followed primarily in the south. Although deep down in my history brain I knew much of this (I have one year of post civil war American history) some of it felt very new. I had the general idea that it had not been handled well but to see how it had been handled badly was really good.

The third section lays out the problems caused by previous leaders within the community. Du Bois primarily criticises Booker T. Washington for having sold the blacks cheap by not insisting on suffrage and higher education. The need for education and suffrage become cornerstones in the rest of the book.

The fourth and fifth sections deal with the importance of education in order to allow everyone to reach their full potential. Du Bois is critical to the idea that coloured people should not have universities. He is of the opinion that a university education for some coloured people is vital in order for everyone to get the best education. At one point he says:

“Progress in human affairs is more often a pull than a push, a surging forward of the exceptional man, and the lifting of his duller brethren slowly and painfully to his vantage-ground. Thus it was no accident that gave birth to universities centuries before the common schools, that made fair Harvard the first flower of our wilderness”.

I found this very interesting. Often we talk about the importance of universal education. Making sure everyone goes through grade school but often university education is seen as something for the elite. The fact that you need someone to educate at the mass level is somehow forgotten. The need to drag everyone along with them.

The book then goes on to describe the life of those in the south. The poor conditions and the cultural practices that are legacies of slavery. He talks about the living conditions that the coloured people were forced to endure due to poverty and a lack of education. He describes the family breakdowns that were caused by poverty.

He also criticises the system of loans to grow cotton and how merchants except only cotton crops as security on these loans meaning that the poor are forced into growing crops that don’t give them the best profit. And therefore stops them from getting out of poverty, and indirectly stops them from working hard. Why work hard if you wont get anything for it? This particular argument feels very relevant today with regards to third world debt and the subprime mortgages.

He criticises the churches for perpetuating the segregation of the south but also for allowing the subjugation of the coloured people in the first place. The use of the church to keep slaves enslaved was, according to Du Bois, a contributing factor to problems of morals within the coloured community.

Technically this is a very well written book. The continued use of the image of the veil and the use of the phrase “the valley of the shadow of death” invokes the Bible in a very significant way. I want to quote large parts of the text to you because they were so beautiful but I am going to limit myself to just a few:

“Herein lie buried many things which if read with patience may show the strange meaning of being black here at the dawning of the Twentieth Century. This meaning is not without interest to you, Gentle Reader; for the problem of the Twentieth Century is the problem of the color line. I pray you, then, receive my little book in all charity, studying my words with me, forgiving mistake and foible for sake of the faith and passion that is in me, and seeking the grain of truth hidden there”.

This is the start of the book. Isn’t this just the most beautiful introduction to a book ever. It made me swoon.

“The history of the American Negro is the history of this strife,—this longing to attain self-conscious manhood, to merge his double self into a better and truer self. In this merging he wishes neither of the older selves to be lost. He would not Africanize America, for America has too much to teach the world and Africa. He would not bleach his Negro soul in a flood of white Americanism, for he knows that Negro blood has a message for the world. He simply wishes to make it possible for a man to be both a Negro and an American, without being cursed and spit upon by his fellows, without having the doors of Opportunity closed roughly in his face”.

This quote just sums up so much of what is wrong in the world still that I had to include it.

This final quote made me cry!

“He died at eventide, when the sun lay like a brooding sorrow above the western hills, veiling its face; when the winds spoke not, and the trees, the great green trees he loved, stood motionless. I saw his breath beat quicker and quicker, pause, and then his little soul leapt like a star that travels in the night and left a world of darkness in its train. The day changed not; the same tall trees peeped in at the windows, the same green grass glinted in the setting sun. Only in the chamber of death writhed the world's most piteous thing—a childless mother”.

The language is jus so beautifully balanced and sad and just wonderful. And the final sentence so incredibly poignant.

He makes a compelling argument as to why keeping people in poverty and ignorance hurts not just the person in question but the country as a whole and might lead to the rebellion and unrest. Often people in power argue that educating the poor can give them dangerous ideas. Here he shows how the poverty actually gives them these ideas. I found the points made in this book to be highly relevant for today too. It is always important to know where we have come from but I think the issues in this book are as valid today as they were when it was written. The importance of education, the importance of universal suffrage and being involved in the political process and the inherent problems when one group dominates another. None of these issues have gone away. None of these issues have been fully resolved.

On a slightly related note I encourage anyone who has the chance to visit the International Civil Rights Center & Museum in Greensboro, NC. It has just opened so I haven’t seen the finished thing but I went to a presentation about it over the summer and it looks amazing. It is housed in the Woolworths where the sit-in movement in the south was started.

I got my copy from Project Gutenberg.

You know, I was under the impression he wrote poetry (primarily). Since I don't read poetry - or haven't really before this year - I hadn't read anything by him. But this sounds more like a collection of essays? Would that accurate describe this book?

Amanda~~Yes this could probably be seen as a collection of essays, a collection that should be read together in order to understand the context. The first two chapters discuss the history of the black people in America in general terms. The next two chapters deal with more current (to him) history and the problems caused by the leaders within the community. The rest of the chapters deal with his impressions and the people he met.

It is definitely something you can put down after a chapter and then pick it up again later without loosing the thread of what is happening.

I really recommend it!

Thank you! I know I'm really, really bad at reading nonfic (though I've been reading quite a bit of it this year for some bizarre reason). I will definitely keep this in mind in the future.

Wow. Your first paragraph has convinced me I need to read it and then the quotes you gave cemented that. Sounds like he's a great writer about an important issue.

Thanks for joining the Circuit!

What a wonderful review. We have a copy of this book at home but I confess I've never read it. Will have to pull it off the shelves ... thank you!

I can tell you were very moved by Du Bois' book. Your review moved me. Thank you for the quotes. I love his writing style too. I am looking forward to reading this book.
I have read "Up From Slavery" by Booker T. Washington. Yes, these two men would have split over their ideas of education for the black man.
I like this part of one of your quotes from The Souls of Black People.

"He simply wishes to make it possible for a man to be both a Negro and an American, without being cursed and spit upon by his fellows, without having the doors of Opportunity closed roughly in his face”.

I read this for the Classics Circuit as well and was amazed (and saddened) by how relevant it is today.

EXCELLENT review, Zee. It seems obvious this book really reached you. I love when books and authors can do that :-) DuBois clearly has a flair for a beautiful turn of phrase.

Rebecca~~Thank you. I really think everyone should read this so I want to thank you for the circuit!

Laura~~I really hope you read it. It is fantastic.

Tea~~I've now downloaded Up From Slavery from Project Gutenberg because your comment made me want to read him to see the difference. And I really loved that quote too.

Teresa~~I was so amazed by how relevant it was.

Aarti~~Thank you! It really did connect with me. This is one of those books that will stick long after I have finished reading.

Excellent review, Zee. Judging by those passages the writing really is beautiful. This sounds like a book that would teach me a lot. And, as Teresa was saying, it sadly seems that it's still relevant.