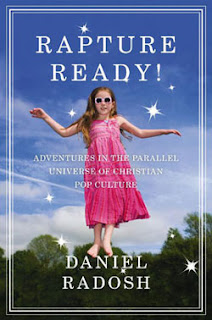 "At the same time, that "Capture the Rapture" button or Jesus fish Hacky Sack serves as a totem that reinforces the wearer's own faith each time he sees it. And it signifies his membership in a larger tribe of Christians. In this respect, witness wear serves the same function for evangelical teens that Ozzfest shirts do for high school metalheads - it makes them feel that they belong. This function, says Hendershot, is precisely why the consumerist aspect of evangelical culture is integral to its nature, rather than, as many critics have it, a sad irony or hypocrisy. 'To purchase Christian products is to declare one's respectability in a country in which people are most often addressed by mass culture not as citizens but as consumers.' To be a market in America is to matter. This is especially important to the nation's misfit youth" (136)

This quote captured me because not only do I teach English but I also teach Business Studies, and this point is one I try to make to my students when we study marketing. You must find your market.

Email ThisBlogThis!Share to TwitterShare to FacebookShare to Pinterest
Labels: Quotable Quotes, Read in 2012 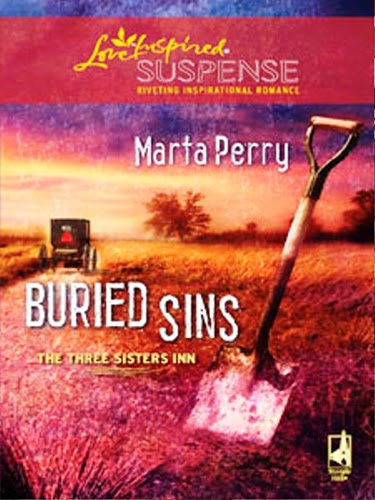 As I said in my TSS post this was a bunch of fluffy books that I won't re-read but they were what I needed or could cope with this week (first week back after the break).

The books tell the story of three sisters: Andrea, Rachel and Caroline. Hide in Plain Sight focuses on Andrea, who comes to Lancaster County after Rachel has been in a hit and run accident. Rachel and the girls grandmother are trying to turn the grandmothers house into an inn. Andrea is skeptical to the enterprise but is forced to help out as Rachel has broken both legs. To make matters even worse she comes into conflict with Cal, the handsome carpenter who rents the barn from her grandmother, and someone seems to be intent on stopping the inn from opening.

A Christmas to Die For focuses on Rachel. A handsome stranger shows up at the inn. Turns out he has inherited the property neighboring the inn. The property belonged to the man's grandfather who died under mysterious circumstances. Circumstances he is hell bent on finding out, even if it means ruin for Rachel and her family. To make matters worse someone seems to want to kill Rachel.

The final book Buried Sins follows the youngest sister, Caroline. Caroline has always been the rebellious younger sister, who runs away from her problems. When her husband dies and someone threatens her, she runs back to Lancaster County to be with her sisters. But is her husband really dead? And why does the local Police Chief Zachary Burkhalter dislike her so?

My biggest problem with these books wasn't the predictability of them (I mean one does expect that from romance books :D) but rather the in your face religiousness. I don't mean that the characters were religious, that I have no problem with, I mean one of my favourite heroines is an Episcopalian Priest, but the way their religion was presented, especially in the first and last book.

In both these books it was presented as if you couldn't possibly be a good person if you weren't Christian. Chief Burkhalter doesn't want Caroline near his daughter because he thinks she is trouble. Fine. Except then he goes on to emphasise that any woman he loves MUST be Christian, not share his values, but be Christian. I get this a lot on a message board where I post occasionally and although I might not be the best person in the world I do think I am a fairly decent human being, as are many of my family and friends, even those who aren't professing Christians. It just grates.

In Hide in Plain Sight I also found Andreas praying to be jarring from a purely stylistic point of view. It was almost as if Perry had been writing and then gone "gosh, it has been 7 pages since I mentioned God, must mention God" and then she had Andrea pray. Maybe I find the talking to God praying to be a bit uncomfortable. Or...

This was better done in the middle book where for example Perry showed Rachel's beliefs by having her help out at church. Maybe it is more natural around Christmas, but I also felt that Perry didn't fall prey to the "oh dear, must throw in God" device as often. And I did find Caroline's lukewarm belief and her movement towards belief to be a lot more believable.

On the whole they were actually quite suspenseful and with a romantic-ish end. They were okay reads but I won't be re-reading them.

Email ThisBlogThis!Share to TwitterShare to FacebookShare to Pinterest
Labels: book review, Read in 2014

Quotable Quotes: Shadows of the Workhouses I 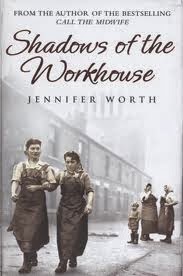 "More than anything else a dying person needs to have someone with them. This used to be recognised in hospitals, and when I trained, no one ever died alone. However busy the wards, or however short of staff, a nurse was always assigned to sit with a dying person to hold their hand, stroke their forehead, whisper a few words. Peace and quietness, even reverence for the dying, were expected and assured.

I disagree wholly with the notion that there is no point in staying with an unconscious patient because he or she does not know you are there. I am perfectly certain, through years of experience and observation, that unconsciousness, as we define it, is not a state of unknowing. Rather it is a state of knowing and understanding on a different level that is beyond our immediate experience" (107).

~Shadows of the Workhouses by Jennifer Worth


In 2010 and 2011 I worked in an assisted living facility. We had several residents die while I was there, but I was only present for one. I had the privilege to sit with a woman for her last few hours of life. And like Worth I feel that it is important that no one dies alone. Both for the one dying and for those who are left behind.

Email ThisBlogThis!Share to TwitterShare to FacebookShare to Pinterest
Labels: Quotable Quotes, Read in 2013

So this week has been a pretty good reading week as far as amount of books I've read, but most of them have been of the fluff variety, so no brain taxing, thought provoking going on :)

. I needed something fluffy to read last Sunday night so I started this rather silly romance...and finished it. It wasn't a book I will read again, but I did read the other two in the series, and if you check back later in the week I'll tell you why.

I also finished  Quiet: The Power of Introverts in a World That Can't Stop Talking

(only $2.99 on the Kindle right now). This is a book that had a profound impact on me, even though it took me ages to read. The review for this book (along with Quotable Quotes) will be up in the future.

This past week I also snuck in one of my new features: Quotable Quotes. I've been keeping a Common Place Book for quite some time. I use a Moleskin Notebook and I write down quotes that touch me, or dates I want to remember, or ideas I agree or disagree with, and I thought I would share some of these quotes with you, my readers.

In other, semi-reading related news, I got an iPad Air on Friday so most of my weekend has gone to playing with that :). I have found several good reading Apps but would love some suggestions if you have them.

Have a great week and please check back for reviews etc. later in the week.

"...apparently there is no end to the demand for near-future stories about persecuted Christians. Somehow the more powerful the religious right grows, the more desperately Christians cling to the fantasy that they are only one act of Congress away from being herded into concentration camps" (93).

I read Rapture Ready in the early summer of 2012 when the Presidential campaign was in full swing and this quote really struck a chord with me. I absolutely don't think this is true for all Christians, but the ones that were very vocal in the press at the time certainly gave that impression.

Email ThisBlogThis!Share to TwitterShare to FacebookShare to Pinterest
Labels: Quotable Quotes, Read in 2012

Book Review: The Magician's Book A Skeptic's Adventure in Narnia 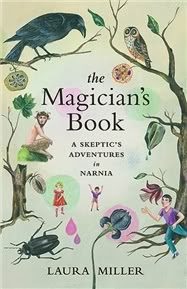 The Magician's Book: A Skeptic's Adventure in Narnia by Laura Miller

Growing up I really loved the Narnia books that feature the Pevensie children (I thought the Silver Chair was gloomy and even as a child I had big problems with the fact that dark people were always the bad guys (something Miller discusses at length)) and so when I saw Ana at Things Means A Lot's review a few years ago I really wanted to read it. And then it sat on my shelf. I finally picked it up last year. I wanted to enjoy it, I really did. I mean it talks about books I love and I do love books about books, but I just couldn't. I had to big objections to some aspects of the book.

Firstly, Miller has a superior tone where she seems to think that she knows the TRUTH. It is hard to point to any specific instance of this but to me it was the overall tone of the writing at times. She is also very condescending towards certain people. Quotes such as the one below makes me think that Miller can only see these people as losers who have nothing better to do, rather than very complex individuals who LIKE their lives.

"Of course, neither Narnia nor Middle-earth are real countries, even if some of Tolkien's most fanatical readers seem to know more about the history of his invented world than they do about the one they actually inhabit" (199).


Secondly, I am to much of an English teacher to be able to like a non-fiction book where the chapters lack thesis statements and where they end up going off on rabbit tales and never finding their way back. I found it very difficult to follow along with what her point of several chapters were. I don't know if it was the fact that points seem to carry over from different chapters or what, but I often felt confused as to what the point was she was trying to make.

Thirdly, although it is important to talk about Tolkien and Lewis in relation to each other, I expect the author to make a point about his relationship. She also launches into a long discussion of how Lewis and Tolkien are like Coleridge and Wordsworth but again this turns  into a rabbit trail about Coleridge. What is the point?!

This isn't to say that this book was a complete waste of time, there were some interesting points, and I learned some things about C. S. Lewis that I did not know before. However, on the whole, this was not a book for me.