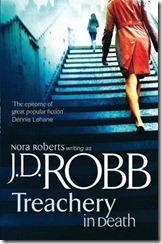 Treachery in Death by J.D. Robb

Synopsis: Detective Peabody accidentally overhears two dirty cops discuss the death of a weasel. Lieutenant Eve Dallas and her team have to bring justice and clean up the police.

My Thoughts: This was a solid addition to this series. It didn’t blow me away but it also didn’t bore me to death.

The book deals very well with the emotions one feels when someone or something you trust in breaks that trust. However, this is dealt with primarily through secondary characters such as Dr Mira. This makes this a little…I don’t know…thrown to the side?

I’m finding it hard to write about this instalment because it follows the pattern of all the other books in the series. A crime is committed and Eve and her team solve it. There is more to it of course but even the tension between Eve and Roark because she does something dangerous feels…done…

The one thing that is a bit different is Eve’s reaction to Bella, Mavis daughter. She isn’t quite as afraid as she normally is. But even that doesn’t seem so strange any more. Eve has grown a great deal in the series and as much as I love the characters and the world it feels like it might be time to wrap this one up. Don’t really know what else to say about the book. It has all been done. And I hate to say it.

Email ThisBlogThis!Share to TwitterShare to FacebookShare to Pinterest
Labels: book review, In Death, Read in 2011, Thriller and Suspense Challenge