Book Review: To Darkness and to Death 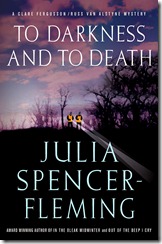 To Darkness and to Death by Julia Spencer-Fleming

Synopsis: 24 hours in Millers Kill, NY. A missing young woman. A big business deal that could mean the start of one career and then end of several others. A relationship moving forward. And in the middle we find Reverend Clare Fergusson and Chief of Police Russ Van Alstyne.

My Thoughts: As in Out of the Deep I Cry this books plays with timeline. But where the timeline in Out of the Deep I Cry moved between past and present the timeline in this book is chronological. All the events take place in 24 (or a little bit less) hours. The book is divided into four different sections: Morning Prayer; An Order of Service for Noonday; Evensong; Compline, thus following the order of prayer in the liturgical day. Each of these sections is further subdivided into times in chronological order. Each of these smaller sections follows a part of the story. I really enjoyed this way of forwarding the storylines. It means that even though the book only covers a short space of actual time it also manages to cover a great deal of story.

By switching between the different characters Spencer-Fleming manages to create a very rich story. Clare and Russ are still the centrepiece but Millie and Lisa amplify many of the characteristics that Clare shows, and also amplifies the theme of strong capable women that flow through the books in the series. Throughout the series we have always come across strong capable women as the supporting cast and I really appreciate this.

Previous books have very overtly covered social issues (unwanted pregnancy/child abuse and abandonment in In a Bleak Midwinter; gay rights in A Fountain Filled With Blood; and vaccinations in Out of the Deep I Cry). This book however is not quite as heavy handed about it. To me this book deals with several issues: the economic problems in many rural areas caused by manufacturing moving elsewhere and nature conservation being the two primary ones. As someone who lives in a town where a large swath of the population work at the local manufacturing company we count ourselves lucky that the owner of the company feels a great deal of loyalty to the area, and also that he has the business sense to value what he gets here. However the area as a whole has suffered greatly in this latest economic crises. Many people are without work. It is also an area with many natural resources that to a certain extent relies on tourism for work and money, so preserving nature is important. I recognise the balance that must be struck but also the problems achieving that balance can cause. Spencer-Fleming manages to balance the different characters and issues very well, she creates sympathy for characters that could potentially be seen as unsympathetic.

Although this book starts out as a book about a potential disappearance interlaced with scenes and events from your average small town (the man collecting his drunk brother-in-law, the men going hunting, women leaving for work, preparations for a church event) it quickly turns into much more of a mystery and Spencer-Fleming manages to tie all the stories together at the end. With each book I read in this series I fall more and more in love with her writing. I’ve said it before but I will say it again, you really must read this series.

In the Bleak Midwinter

A Fountain Filled With Blood

Out of the Deep I Cry

Purchase To Darkness and to Death from BookDepository.co.uk

Thanks for your review. I'll keep an eye out for these books. I am your latest follower. Hope to read more reviews from you soon.

Thanks for passing by Bookventures Book Club.

I agree that I love her writing style. And the social and political issues make for believable anchors for the murders. Spencer-Fleming informs without being preachy. Glad to know that you're reading through these too.

Tell you what - I may not get to this series anytime soon, but I have a friend I think would LOVE it and I will pass on this link to her so she has the authors name. :)