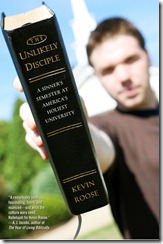 The Unlikely Disciple: A Sinners Semester at America’s Holiest University by Kevin Roose

My Thoughts: I really really enjoyed this book. I found it interesting, thought provoking and very funny. Roose really manages to humanise a group of people I personally find difficult to understand, evangelicals. Yes, I am aware that evangelicals covers a large swath of people and to lump them all together is counter productive, yet it is done regularly, and I think that this is where Roose book is so important. He manages to show the wide diversity there is.

Roose approaches his semester at Liberty with a fairly open mind, and where he isn’t open minded he is at least very aware of his biases but he somehow manages to compartmentalise all of these biases. And to me it seems like he manages to truly open his mind to what he can learn at and from Liberty and its students.

By essentially going under cover Roose manages to show a side of Liberty he probably wouldn’t have seen if he had gone there and told them what he was doing, even the boys he lives with admit to this once he tells them the truth.

I have a complicated relationship with people of faith. Part of me is incredibly jealous. I wish I had that unfailing faith. At the same time the agnostic scientist in me wonders if there is such a thing as an ultimate truth. Because of this I could totally relate to Roose conflicted feelings towards what he was learning. He simply could not except what was being presented as truth. And he found it difficult to reconcile what he learned with what he knew and with what he saw. This is what I feel as well. I am a bit of an all or nothing kind of person. I find it difficult to take the Bible as truth because there are parts that I feel cannot be truth, so why should I accept the rest as truth?

One thing that I found interesting was that Roose, like Stephanie Levine (who wrote Mystics, Mavericks, and Merrymakers), mainly bonded with the rebels. It was the students who pushed the boundaries that he found himself drawn to. Partially because they were a bit like him, and partially because they seemed curious. This leads me to wonder if secular people can ever truly relate to those with strong religious beliefs or will we always interact with the fringes: the questioning and the fervent? Because just like Levine attracted girls interested in converting her, Roose attracts those who want to make him stronger in his (perceived) faith.

The idea of wanting to increase his faith is one that I find both intriguing and a bit frightening. Personally I am of the belief that my relationship (or non-relationship) with a deity is my business. I do find it very off-putting when someone tries to foist their religion on me, however, this book (along with discussions with others) has started to make me realise that often those who do it, do it from a perspective of care. They are genuinely worried about me and my soul. That cannot be a bad thing. Roose does a masterful job of showing how, for many of the students at Liberty prayer and checking the status of peoples religious beliefs is done out of caring. They truly believe that being saved is the most important thing.

One of the aspects I find difficult with many evangelicals is on social issues, and this was something Roose touched upon. I particularly find the attitude many evangelicals I have “met” regarding homosexuals to be very problematic. And Roose certainly found this too. I do however agree with his aunts, I wish he had somehow managed to not be so passive when the issue came up. I was left wondering (like Roose) why they are so hung up on the issue of homosexuality. I really do not understand how someone else's sexuality impacts on you? I found Roose comment about the issue coming up with “near-Tourettic frequency” (239) to be both sad and telling.

I found myself taking loads of notes in the margin in this book. Some of the notes were because I found things interesting, sometimes because I heartily disagreed. All of the notes because they made me think, draw parallels and conclusions. I found it particularly helpful to recently have read Levine’s book because it touched upon many of the same aspects: How people of faith can grow stronger; how our world view is impacted by our faith; and ultimately about the connections people make with each other. It is also about showing people for what they are. I found the following quote to be particularly telling with regards to sociology and anthropology:

I reached this conclusion: humanizing is not the same as sympathizing. You can peel a stereotype off a person and not see a beautiful human being underneath. In fact, humanity can be very ugly” (110).

One of the things that Roose discovers is very similar to one of Levine’s conclusions. He finds that when certain expectations regarding dating are removed he is far more able to actually be true to himself, just as Levine found that when removing the competition for and with boys, girls were able to truly be themselves. For me a lesson to take from these two books is that we as a society has to stop having expectations on relationships. By placing artificial expectations and stereotypes on relationships we are not letting them happen in a natural way.

This was a well written book. There were some instances where I felt that he jumped around a bit between ideas. Primarily each chapter covered one idea but sometimes he did jump a bit and cover several ideas in each chapter.

Purchase The Unlikely Disciple from BookDepository.

"This leads me to wonder if secular people can ever truly relate to those with strong religious beliefs or will we always interact with the fringes: the questioning and the fervent?"

This is a really interesting question. I attended a religious college (of my own professed religion) but quickly became friends with the other "fringe" sorts and eventually lost my faith and any connection with the religion. I left the school with both a boyfriend and a best friend that had attended for other than religious reasons. I was unknowingly one of the "questioning" and instead of converting those close to me, I ended up leaving religion and embracing science in a way that was frowned upon at my school.

I find the premise of this book really interesting because I frequently saw first-hand the shift in people's treatment of each other when they discovered their level of or lack of faith in the prescribed religion. An interesting sociological situation to say the least!

This sounds like a book I must read! I know this sounds very biased, but I often have difficulty understanding evangelicals as well.

As far as I've been able to see, the best way for people of different beliefs to get along with each other is for neither party to have a stake in proving the legitimacy of their beliefs, or changing the other party's mind.

Also, do you think the questioning are really on the fringes of religious communities? I'm fairly questioning, and I am never sure where I stand in relation to other people of my same religion.

What an interesting book! I also find it difficult understanding fervent believers and am insulted when someone says I must be "saved", that I must "believe". Thanks for the review, I am adding this to my TBR list.

I've heard mixed reviews about this one, so I'm glad that you enjoyed it. :)

I was raised in an evangelical church and was saved when I was 8 years old. I still believe in God and the thought that Jesus was sent to save us from our sins, but I have to admit that I have left the church because I have major issues with their beliefs in other ways.

Gay marriage: I could care less if someone is gay. I have lots of friends that are gay--why shouldn't they be allowed to get married and have families?

Women issues: This was the kicker for me. The last church I went to actually said that if you were married and did not have children you were sinning by breaking God's commandment to "be fruitful and multiply." I thought that was ridiculous. I am not a baby factory and I think people should only have kids if they want them.

Voting: I really don't appreciate any non-profit church organization telling me who to vote for. I don't want anyone to tell me what their litmus test is for voting or make me feel bad for caring about social issues like poverty, civil rights, and the environment. I was infuriated that the pastor even brought it up--I happily voted against Bush both times he was up for election (even though he won my state's electoral votes) and I voted for Barack Obama. I am not ashamed that I considered myself a Christian and voted against Bush. I think the church culture in America tried to make me feel that I was sinning by doing that.

I think I might actually pick up this book after reading your review. I don't know if I will ever go back to church...who knows. Right now I'm still not ready to. Thank you for posting this really thoughtful review!

Thanks for your review - this book is on my PBS wishlist and I am waiting for it to come up. I love the idea of exploring religions from the inside!