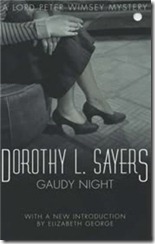 Synopsis: Harriet Vane finds herself returning to Shrewsbury College, Oxford, much to her own surprise. While there she discovers a poison pen note in her gown and a disgusting drawing on the College quadrangle. When the college faculty later asks her back to deal with a spate of notes and “mischief” from the poison pen she does not hesitate. As the year goes on and she comes no closer to finding out the identity of the poison pen she asks Sir Peter Wimsey for help and the two are left to deal not just with someone trying to hurt others, but also with their feelings for each other.

My Thoughts: Oh how I loved this book! I read it because Nymeth of Things Mean A Lot, HIGHLY recommended it and I am just so incredibly glad I did! (I’m also glad I read them in order)

This book had me captured from the very first page, when it transported me to Oxford. The opening passages felt like one of those time traveller movies where you’re current location gets blurred and instead another location comes into focus. I went from being curled up in my bed, dressed in my pjs, with the wind howling and the rain smattering against the window, to the quadrangle at Shrewsbury College, Oxford, in the 1930s. Sayers wrote so vividly that I felt as if I was there.

The vivid writing was one of my favourite aspects of this book, it allowed one to really feel the fear and suspicion that was present at the college. Although the tempo of the book felt slow this contributed to the unease of the situation. One never knew when the poison pen would strike, but life still had to go on, especially if they are to catch the poison pen and all they stands for. Throughout the book I had a vaguely uncomfortable feel of being constantly on edge. Not only about when the poison pen would strike next and what they would do, but also about who they were. The strain of not knowing who the enemy was took their toll on me as well as the characters. Sayers really did a masterful job with creating the tension.

Part of the tension also came from Harriet’s feelings for Peter and her coming to terms with them, and what they meant. As well as Peter’s feelings (although to a much lesser degree) as he grappled with Harriet and her feelings. These multi-levelled tensions just had me captivated and forced to continue reading (really bad case of just one more chapter had me finishing the book in two days, at 3.30am).

A theme that was hinted on in previous books (and one that I highlighted in my reviews) was brought to the forefront in this book, and that is the role of women in society. The story takes place in the, still relatively early days, of co-education at university level, in one of the all female colleges at Oxford. The poison pen’s actions are very much directed towards those women who seek a higher education, and therefore to their* mind attempt to supplant a male field. Through the characters we meet at Oxford Sayers actually manages to make a very compelling argument for education (one of her dear to heart topics). Although we meet more men who are not serious about their education, Sayers also introduces us to women who are at the university for completely the wrong reasons. She manages to show us, the readers, that education only matters if we take it seriously, but that taking it seriously shouldn’t mean let it consume us. A balance is important. Further she argues that a well educated woman isn’t a threat to men, but rather a benefit to society, if she is allowed to use her education (an argument that is nailed down very early on in the book).

For me one of the great enjoyments of the book was seeing Harriet’s emotional growth. She had been so badly damaged in previous books that to see her grapple with her feelings for Peter was very gratifying as one could see a real growth throughout the book. And, as Nymeth mentioned, the river scene, oh my the river scene. Possibly the most perfect scene in the book (although I have another favourite in the final scene of the book). It was just packed with emotion and vividness. Like in the opening scene I felt as if I was in one of the boats on the river. I could see it all in front of me.

If I have one criticism of this book, it isn’t for Sayers writing but rather for the edition I read. It was a modern reprint with a new foreword and I would have loved a glossary at the back explaining all the academic terms. Although I myself am a graduate of one of the Ancients, my Alma Mater has been thoroughly modernised (well excepting the whacking with the Geneva Bonnet at graduation) and I had to do some googling to understand the differences in gowns and some of the academic terms. Now this might just be me and my general academic geekedness but I think that a book where much hangs on the academic world it would have been nice to explain it further to those who are not as involved in it. However, this is a VERY minor point.

Overall I agree with Nymeth on her assessment that one MUST read the books in order, otherwise one misses out on much of what makes this book great. The book also left me wanting to read the books that feature Peter Wimsey and Sayers essay “The Lost Tools of Learning” In addition I want to say that everyone should read this book, it is AWESOME!

I love Gaudy Night so much it's ridiculous. Whenever I read a review of it I want to go get it and read it all over again. I love the theme of intellectual and emotional honesty that runs all through it--it's that edge of relentlessness in honesty that makes the story so compelling to me.

I agree, I just read this and it is awesome!! I read all four with Peter & Harriet and loved them (this one most of all) though I've just finished Busman's Honeymoon and swooned over it as well. This is a great set of books, so rereadable :)

What a wonderful long review. I love Gaudy Night, it's my favourite although I like all of her books and the tv adaptations too. It's driving me mad that I can't find my copy, it's somewhere in the house, a yellow Gollancz hardback. Sayers wrote Peter as her perfect man, in real life she wasn't so lucky.

yay! yay yay yay :D Reviews of this make me so happy. And yes, the river scene, and the final scene, and oh, everything <3 Do read Busman's Honeymoon - it's wonderful as well!

I have Busman's Honeymoon sitting on my bookshelf waiting to be read, I just have a few other books to read first. I'm really looking forward to it.