Book Review: Harry Potter and the Prisoner of Azkaban [Audio] 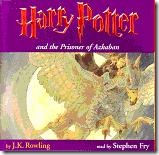 Harry Potter and the Prisoner of Azkaban by J.K. Rowling

Synopsis: Harry finds out that convicted criminal and Voldemort supporter Sirius Black has escaped Azkaban (wizarding prison) and is after him. Then he finds out that Black was his parents best friend and is his godfather.

My Thoughts: Prisoner of Azkaban has always been one of my favourite Harry Potter books. There is a great mixture of excitment, humour, and scariness. Along with it moving the story forward and introducing new characters in a good way.

I love the development of Hermione in this book. Emotionally not that much happens with Harry and Ron (which feels true to the age they are), but Hermione starts to really bloom. This book always makes me wish I had read it when I was the same age as the characters (I was in my late teens when I started reading HP). Hermione is so much like me. The obsessive need to know everything, and to show it off. Taking on more than she can chew, and then refusing to admit it before almost having a nervous breakdown. These are all me (both then and now). And I think it would have been great to have someone to whom I could relate to growing up.

I also love the relationship between Harry and Lupine. It is nice to see Harry bonding with a teacher that was also his parents friend. Someone who can connect him to his past as well as his future.

I really do love this book, but since I have read it many times it is very hard to review it :D

Narration: I’ve previously declared my love for the narrations of Mr Fry and this book is no exceptions. His voice is very soothing but not to the point where one falls asleep. He changes his voice to distinguish characters but not in a way where it seems out of character (unlike my rant regarding Dean Thomas accent in the US version). It is just, for me, the perfect narration of these books.

Purchase Harry Potter and the Prisoner of Azkaban in audio from BookDepository.

Mmm, Stephen Fry. I love nearly everything he does, and I could listen to him reading Harry Potter all day.