Book Review: Have His Carcase 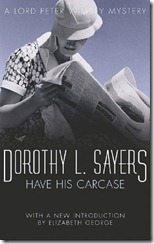 Have His Carcase by Dorothy L. Sayers

Synopsis: Harriet Vane, on vacation by the sea, finds the corpse of a young man on a deserted beach. The only footprints in the sand are those of the young man himself but the body looks like it has been dead only a few minutes. How is this possible. Lord Peter Wimsey soon arrives on the scene and the pair set about to solve this “locked room” mystery.

My Thoughts: This book had me really confused, in a good way. I didn’t work out who the killer was, or how they had managed the crime, but still it was a very enjoyable read.

I loved the banter between Harriet and Peter. It is just so very witty and somehow lovely. And also very very British which I thoroughly enjoy.

But what I loved the most about this book wasn’t actually the mystery or the banter, but rather Sayers commentary on society. I loved this quote regarding women’s fashion:

Were men really stupid enough to believe that the good old days of submissive womanhood could be brought back by milliners’ fashions? ‘Hardly,’ thought Harriet, ‘when they know perfectly well that one has only to remove the train and the bustle, get into a short skirt and walk off, with a job to do and money in ones pocket (39).

Sayers manages to say so much both about her own time, about societies silly conventions and about the relationships between men and women and the lies they tell each other in this short excerpt. Humans often try to hold on to things that have long since left us, a time or a person. But through our imagination we try and recapture it. But, as Sayers, through Harriet, points out, there is no way we can hold on to it. In this case it is the woman as submissive to man, because women had already learned that they were not.

It is interesting to note as well that Have His Carcase was first published in 1932 well before ww2 and the great influx of women into the workforce. Sayers was, without a shadow of a doubt ahead of her time when it came to views on women and their place in society.

I will admit I had two major problems with the book. Both are related to me and my rather poor memory :)

First of most of the solution to the death is contained in a cipher and I have to admit that has never been my strong suit. I am no good with logic puzzles and I found the explanation of how to solve the cipher to be more confusing than the cipher itself.

The second problem was that I am awful at remembering names, and again, the ability to remember the name of a character became quite central to solving the mystery.

That said, neither of these two aspects majorly took away from my enjoyment of the book. It was a fast and fun ride. I could see the events unfold quite clearly in front of me. The characters were all very likely (if somewhat two dimensional). And the social commentary took on just the right tone. I highly recommend this book.

Previous books in the series reviewed at Notes from the North:

Purchase Have His Carcase from BookDepository.co.uk

I totally loved Have his Carcase. I thought the atmosphere was great and the solution to the mystery very clever.

I'm glad I'm not the only one who found the cipher confusing! I had to read the explanation for it several times before I worked out what was happening there. But I'm very fond of Have His Carcase now--as you say, the banter between Harriet and Peter is lovely. It's one of not so very many times we get to see them just relaxing and having fun together.

The cipher is definitely confusing, yep :P And when you mean that the characters are one-dimensional, you mean the secondary ones, right? I can see that, but Peter and Harriet are so human and real that I don't really mind.

Nymeth~~I definitely mean the secondary characters. Peter and Harriet are incredibly real. Which my staying up until 3:30am last night to finish reading Gaudy Night proves :D