Book Review: Murder at the Vicarage 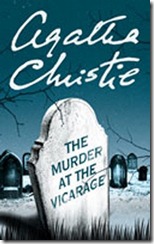 Murder at the Vicarage by Agatha Christie

Synopsis: Colonel Protheroe is not a well liked man, as a matter of fact he is disliked by most, so when he is found dead in the Vicars study no one is really sorry. They are however curious as to who dun it!

My Thoughts: I did not get the killer right. I really hate it when I don’t manage to get it right :) So in that way I suppose it was well written. This was my first Christie, shocking isn’t it. I love a good who dun it, and yet I have never gotten around to any Christie. I am glad that the Classic Circuit: The Golden Age of Detective Fiction got me to finally take the plunge and read one of hers. All that said…

I had some problems with this. I often felt like I was supposed to already have a relationship with these characters. Know things about them that I couldn’t possibly know. Take the narrators nephew who is described as “young”. How young is young? As the story unfolds one finds out how young he is but this bugged me at the time. In addition to this we never really do find out what he is doing there. Why is he living with his uncle and not his own parents?

I also found the ending to be very rushed. Amanda from The Zen Leaf commented that “her” Christie had a large info dump right at the end and I have to say I had the same problem with this one. All of a sudden all these clues and information gets dumped on you to solve the murder in the last five pages. I have to admit that I go to about 10 pages left and wondered how in the whole wide world she were going to sew this up in what was left. And although you do find out the killers identity and motives it is done in a rather unsatisfactory manner. It is simply to rushed.

It was a very enjoyable read though. A easy to read cosy murder mystery (I always find that rather an oxymoron) that I could relax into. Apart from the small niggles with the characters and their relationships there was nothing that greatly disturbed me. It didn’t suffer from what so many murder mysteries now seem to suffer from, a need for blood, gore and other deviant behaviour. Instead it was a almost a pleasant murder.

Purchase Murder at the Vicarage from BookDepository.

Info dumps are pretty standard in Agatha Christie stories. It's impossible to solve most of them because you don't have key pieces of random background information that she reveals only at the end. If you're used to it, it stops bothering you. ;)

I think that's true of most Christie novels- a big build up and a lot of info right at the end.

I'm glad it's not just me that had issues with the info-dump. I'll be mentioning it in my review in 2 days, too.

Hmm...I've been told this was a good introduction to Christie, but the fact that it kind of assumes you already know the characters makes me hesitate. Or perhaps that's just her style? Either way, it does sound like a good read!

It's been so long since I read any Agatha Christie - my recollection is that she doesn't go too deeply into characterization (she definitely has types that you see over and over). But I tend to find the mysteries satisfying, in spite of the infodumps.